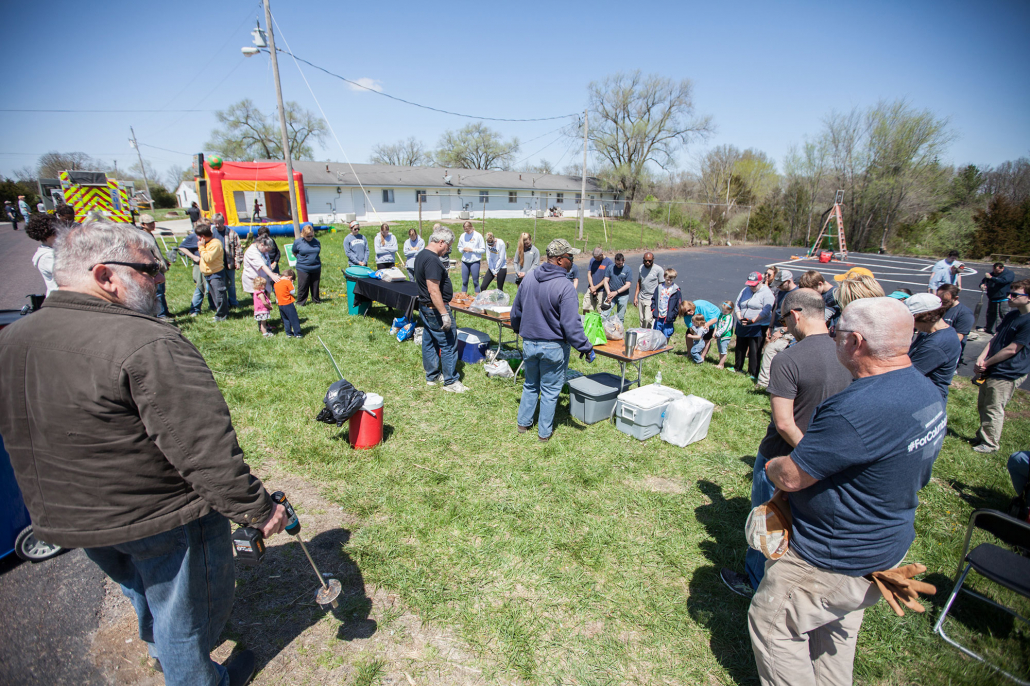 The basketball court looked as though it had been abandoned for decades. The chain link fence that surrounded it on two sides was completely overgrown with weeds and brush, leaning in places as scrub trees wove themselves into the fence. The asphalt was in particularly rough shape, cracked in multiple places where weeds thrived in the spaces in between. The lines of the basketball court were faded, like it hadn’t seen activity in many years.

You’d never have guessed that this was the best location for the neighborhood kids to play.

That was the reality, though. This space – in a low-income neighborhood just outside of Columbia’s city limits – was consistently used by the kids living in the area. With no sidewalks and relatively-narrow streets, this uncared-for corner of Bon Gor neighborhood was still the best place for children to congregate and play.

Because one of our partnering churches cared enough about the neighborhood to bring it to our attention, a team of ForColumbia volunteers was able to take this court from dilapidated to renovated.

The video below tells the story of the ongoing impact of a “one-day” project in one Columbia neighborhood. Each year, our partnering churches identify neighborhoods in need. We always go into neighborhood projects with the simple goal of loving and serving the people of our city, but it’s a particular joy to see connections made and relationships deepened.

Pastor D’Markus Thomas-Brown of Convergence Church says that his church had attempted in the past to reach out to the residents by hosting a neighborhood event, but that effort had not engaged many of the residents. Prior to the ForColumbia project, “We got a couple of the families out of the neighborhood to come out (to our event), but for me, it wasn’t satisfactory,” he explained. “Post-ForColumbia, we had a gospel-fest, and we had more people from the neighborhood attend than the people that we invited from all our affiliations out in the community.”

D’Markus believes that the difference, at least in part, came as a result of the one-day serving event in April 2018. “That investment in the neighborhood has ramped up the participation of the neighbors in the Bon Gor area.”

ForColumbia is entering its fifth year, and it delights us that the Bon Gor story is not entirely unique! Instead, it’s just one of the more visible outcomes of hundreds of volunteers giving their time and effort to live out God’s call to love and serve our neighbors with no other agenda than to reflect His grace.

Renovating the basketball court and hosting a neighborhood BBQ was, in large part, “just” a one-day effort. However, one day of effort can often yield far more than a mere day’s work. Sometimes “one day” can be the impetus for something far bigger. That’s what happened, what is happening, at Bon Gor. One local church, committed to loving their neighbors, was given a wide avenue to live out that love in a single day, alongside many other Christian brothers and sisters and the fruit they are seeing as relationships are being developed is far more valuable than just that “one day.”

The pastors and executive team heading up ForColumbia believe that we are seeing the work of the Spirit moving through our meager efforts in our city…and it’s beautiful. This is the kind of kingdom opportunity we all have the chance to be a part of when we serve together, side by side, to His glory.

FAQ for Volunteering with #ForColumbia2019
Scroll to top